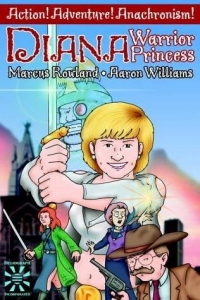 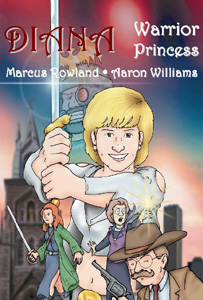 By Marcus Rowland, and illustrated by Aaron Williams (Nodwick, PS238), Diana: Warrior Princess is a modern-day role playing game with a difference.

Imagine our world, seen by someone as remote from us as we are from the ancient Greeks, and with as many gaps in their knowledge. Imagine it converted into a TV series by a production company with the loving attention to historical accuracy we have come to expect from such series. Then imagine the RPG of that series...

This is the world of Diana: Warrior Princess.

In print, 116 pages from Heliograph Inc.
and now available as a 70-page PDF from e23.sjgames.com and Drivethru RPG
Sampler (6 pages, 426k) 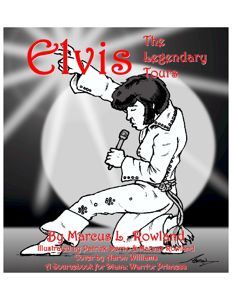 . . . as it might be shown in a TV series made a few thousand years in the future, and with the loving attention to historical accuracy we’ve come to expect from such TV series

This is the world of Diana: Warrior Princess. And like other shows the producers need to maximize their audience (and their profits) any way they can. Such as an all-new spin-off show set in the same world . . .

Exiled by his evil half-brother, the sorcerer-priest Costello, wandering bard Elvis searches for a way to return to his home, the mysterious Land of Grace. Armed with his wits, guns, and guitar, and aided by his sidekicks John Lenin and ‘Senator’ Joe McCartney, his adventures really rock!

Elvis: The Legendary Tours expands on the world of Diana: Warrior Princess, adding new settings, new characters and gods, the Mystic Power of Music, Elvis Impersonators, the martial art of Sudoku, and much much more1.

1 Definitions of much much may vary.
2 This is technically known as a lie.
3 So is this. 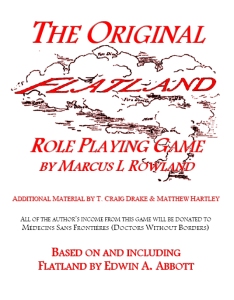 By Marcus L Rowland, Additional Material By T. Craig Drake & Matthew Hartley, Based On And Including Flatland By Edwin A. Abbott

Imagine a world of two dimensions and plane geometry, in which the very idea of height is considered insanity and the darkest heresy. Where the only thing that matters is the straightness of your sides and the regularity of your angles. Where the slightest deviation from the norm can lead to arrest, imprisonment, execution (and consumption by your peers) or a lingering death by starvation.

Welcome to Flatland. Enjoy your stay…

Action and adventure in a world where characters are supposed to be two-dimensional!

Whether your adventures take you to the criminal classes of The State and an encounter with legendary gang leader “Scarside” Al Gebra, across the border to Polygonia and an attempt to rescue Mad King Euclid, or into the glamorous world of politics and diplomacy with the multi-faceted polygons of the aristocracy, there’s something here for you. Best of all, by buying this game you’re supporting charity: All of the author’s income from this game will be donated to Médecins Sans Frontičres (Doctors Without Borders)!